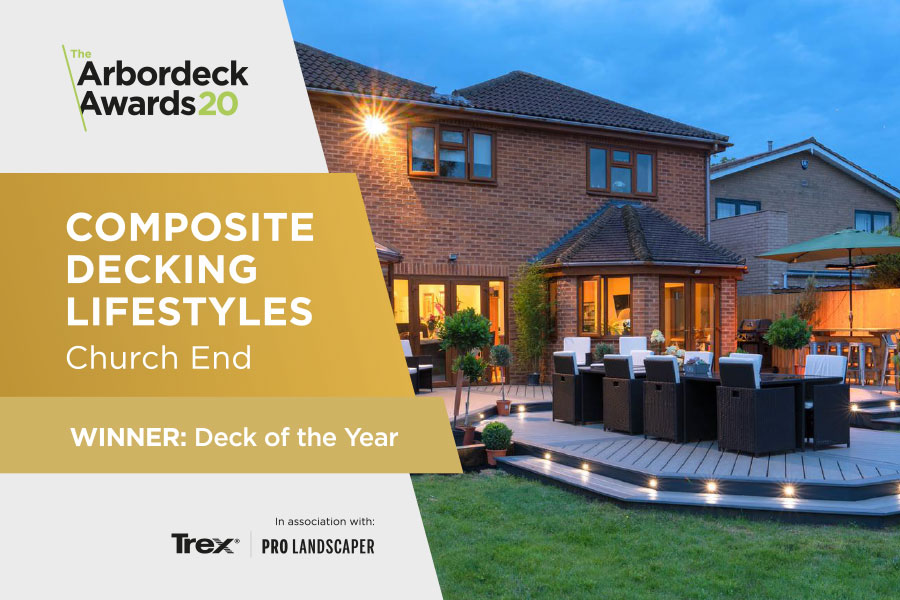 Cambridgeshire-based Composite Decking Lifestyles has taken the title of ‘Deck of the Year’ at the 2020 Arbordeck Awards, with its Church End project named as the winner thanks to its stunning design.

The Trex® composite decking installation, which also came out on top in the ‘Best large Trex deck’ category, caught the judges’ attention thanks to its three-tier design which features a formal dining area, casual seating zone and a bar. Its use of two Trex colours – Gravel Path and Island Mist – along with lighting for both ambience and safety resulted in a sleek and modern decking space.

And as a result of taking the coveted ‘Deck of the Year’ title, Composite Decking Lifestyles’ owner and installer, Carl Boreham, has won a money-can’t-buy-prize: a four-day trip for two to Washington, D.C. which includes a visit to the inspirational Trex University in Virginia, which will take place later in 2021.

While Composite Decking Lifestyles’ Church End project took the titles of ‘Deck of the Year’ and ‘Best large Trex deck’, Surrey No1 Handyman scooped the ‘Best small Trex deck’ prize as well as ‘Best commercial Trex deck’ for another installation. North Spas came out on top in the ‘Best Arbordeck softwood timber deck’ category, while A Brighter Shade of Green’s Castlenau project was named as ‘Best Trex design solution’.

Simon Thomas Deck & Design, 2019’s ‘Deck of the Year’ winner, was also given special recognition by the judging panel through the ‘Award for Innovation’, due to its Gower Road project, which included a sunken seating area.

The Arbordeck Awards may have needed to go virtual this year, but that didn’t stop them from growing in popularity for a third year in a row: we’re delighted to have received a record 84 entries across all categories.

Commenting on the 2020 Arbordeck Awards, head judge Lee Heitzman said: “It’s been fantastic to see the Arbordeck Awards grow again in 2020 despite the unusual circumstances, with a record number of entries and some outstanding projects which meant it was by no means an easy task to decide on the winners of each category. Congratulations to all of our category winners this year, especially Composite Decking Lifestyles for being named as ‘Deck of the Year’”.